Writers Night at the Springwater Grange — this Saturday!

A little press release about a great writing event happening this weekend:

This year’s event will feature Jon Bell, author of On Mount Hood: A Biography of Oregon’s Perilous Peak.Bell will read from his book, and show slides of the mountain from his extensive collection of images.

Jon Bell will be joined onstage by hosts Stevan Allred and Joanna Rose, and by Portland based writer and publisher Laura Stanfill.  Stanfill’s Forest Avenue Press has recently published its first book, Brave on the Page:  Oregon Writers on Craft and the Creative Life. All four writers are included in this anthology.

To celebrate the publication of Brave on the Page Allred, Rose, and Bell will read work that explores and defines this evocative phrase.  Stanfill will speak about her own creative life, and the pleasures and pitfalls of being a writer, an editor, a publisher, a wife, and the mother of two small children, all while bootstrapping Forest Avenue Press from nothing to a going enterprise in less than a year.

In September Forest Avenue Press will release Allred’s short story collection, A Simplified Map of the Real World. “It’s a suite of linked short stories set in a small town I call Renata,” says Allred.  “For me, being brave on the page has meant writing about the place where I live, fictionalizing it of course, but always running the risk that my fellow Estacadans will feel like I’ve gotten it wrong.”

Rose will read from her novel-in-progress, Everybody’s Rules for Scrabble.  Her novel takes on the controversial issue of abortion.  “There are lots of things we’re scared to talk to each other about, like sex, and death, and religion,” says Rose. “Writing about them takes some courage.  It helps if your parents have already passed on, which mine have.”

As always, host Stevan Allred will invite the entire audience to his home for a reception after the reading.

Forest Avenue Press will release Stevan Allred’s A Simplified Map of the Real World in September of 2013.  Allred has twice been nominated for a Pushcart Prize.  He has survived circumcision, a tonsillectomy, a religious upbringing, the 60’s, the break-up of The Beatles, any number of bad haircuts, the Reagan Revolution, plantar fasciitus, the Lewinsky Affair, the the Florida recount of 2000, the Bush oughts, the War on Terror, a divorce, hay fever, the real estate bubble, male pattern baldness, and heartburn. He is the editor of the zines Dixon Ticonderoga and The Intentional Ducati, and together with Joanna Rose, is the leader of the writing workshop known as The Pinewood Table.

Joanna Rose writes poems, short stories, long stories, and really long stories, true to life and also imagined. Some of them have been published (Bellingham Review, Windfall Journal, ZYZZYVA, High Desert Journal, Story Magazine, and the Oregonian newspaper.)  One of them was so long it became a novel, Little Miss Strange.  She teaches writing in classrooms all over the state, and with Stevan Allred at the Pinewood Table, which is in her living room in a small blue house in southeast Portland.

Laura Stanfill believes in community. She’s the founder and publisher of Forest Avenue Press and the editor of the anthology Brave on the Page: Oregon Writers on Craft and the Creative Life, a Powell’s Small Press Bestseller. Laura, an award-winning journalist, has been published in local newspapers and magazines in New York, Virginia and Oregon. She earned her English degree from Vassar College and she’s at work on a nineteenth century novel about bobbin lace, music boxes and a fainting pimp. See forestavenuepress.com for more information.

An outdoor enthusiast and wordsmith, Jon Bell has been writing from his home base in the Portland, Oregon, area since the late 1990s. After growing up in Mansfield, Ohio, Jon got a bachelor’s degree in history from Michigan State University, then traveled extensively across the American West before landing in Portland. His first published pieces were about some of his backpacking and climbing excursions in the Northwest, including countless weekends on Mount Hood. His work has appeared inBackpacker, The Oregonian, The Rowing News, Oregon Coast, and many other publications. He is also co-author of the climbing guidebook, Ozone, and a former president of the Ptarmigans Mountaineering Club. Visit his freelance writing web site, www.jbellink.com. He lives in Lake Oswego, Oregon, with his wife, two kids, and a black Lab.

On Mount Hood — Book blurbs and thanks

With the paperback of On Mount Hood coming out later this month (7:30 p.m. Wednesday, April 24 at the downtown Powell’s to be exact), I had to find some solid and willing folks to offer up blurbs for the back of the new cover. Luckily, since the book first came out, I’ve met a few of those folks and they have been kind enough to lend some lines to the paperback.

Many thanks to them all:

Kim Cooper Findling, author of Chance of Sun and Day Trips from Portland.

Jon Tullis, spokesman for Timberline Lodge, vice chair of the Oregon Heritage Commission, and the author and editor behind the book, Timberline Lodge: A Love Story.  He’ll also be part of the paperback launch at Powell’s on April 24th!

Jack Nisbet, author of David Douglas, a Naturalist at Work and other books.

A second round of thanks, also, to Bruce Barcott, author of The Measure of a Mountain, who gave me my first blurb ever, which is now on the cover of the On Mount Hood paperback.

On Mount Hood — The paperback

I got a box in the mail today with something inside that reminded me I should probably start spreading the word about an upcoming event at Powell’s on April 24.

The paperback version of On Mount Hood officially comes out the day before the event at Powell’s. More info on that event to come soon. In the meantime, though, I thought I’d share the paperback image as a little peek at the next chapter of On Mount Hood.

It doesn’t happen all that often, but every now and then we’ll stumble across a copy of the Mount Hood book in an unexpected place. The Zigzag Ranger Station, the museum in Government Camp, even New Seasons.

Today it happened while hiking around and learning about owls at the Owl Fest at Tryon Creek State Park. There in the gift shop, we came across a lone copy on the top shelf. A nice surprise, indeed. 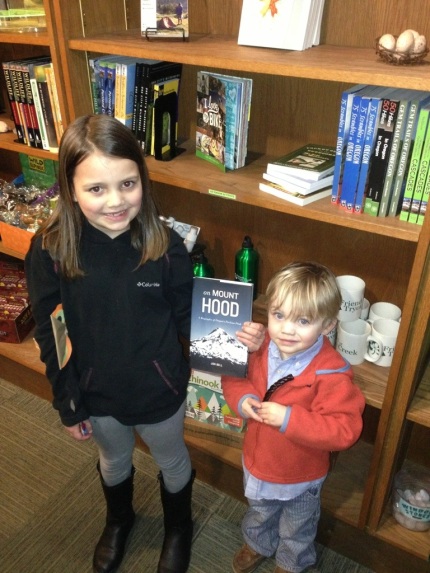