After an insufferable amount of gray sky this spring, including an impenetrable bit last weekend that kept my Atlanta friend and his wife from seeing Mount Hood during a three-day visit, the sun has finally won out. It’s beautiful in Portland today, it looks bluebird up at the mountain, and at least as of today, the forecast looks like more of the same for the next few days.

Time to go for a hike.

But because this year has been such a precipitation-filled one, many of the best hikes around the mountain are still buried under feet of snow. According to the Natural Resources Conservation Service, which monitors snow levels among other meteorological statistics, there’s still more than 12 feet of snow at 5,400 feet on Mount Hood, more than 7 feet at 4,400 feet on the north side, and still close to 3 feet south of the mountain at 3,800 feet.

Not to fear. There are still plenty of low-elevation walks close to the mountain that can scratch the hiking itch. And if you don’t mind a little snow (or a lot) and are confident and capable on snowshoes, there shouldn’t be much to keep anyone off the trails now that some good weather is at least temporarily here. (Disclaimer: This blog is for information only. Hike at your own risk and only within your own abilities and comfort levels.)

A few of my springtime favorites: 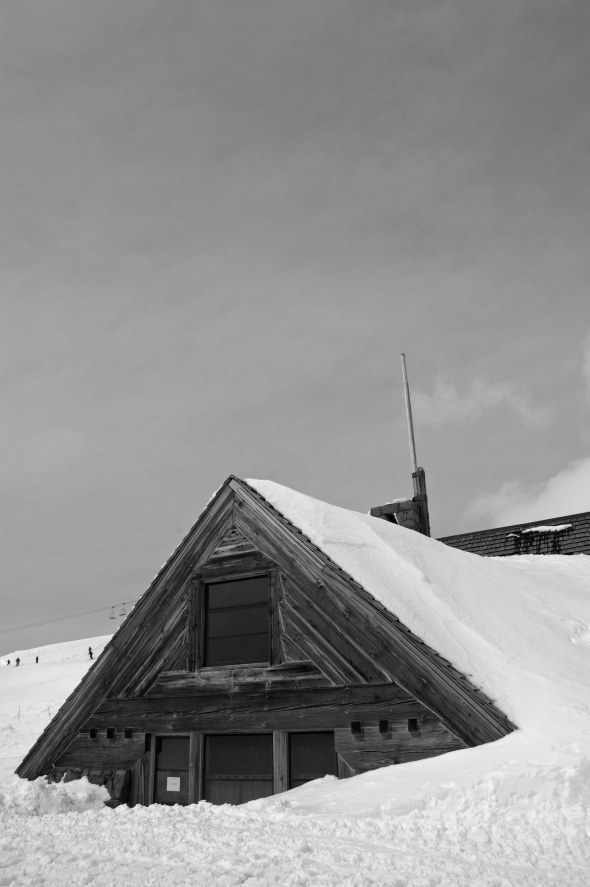 Silcox Hut at about 7,000 feet on the south side of Mount Hood.

Palmer Snowfield: Nothing like a slog up the lower end of Hood’s South Side climbing route to take in the mountain on a clear day and wake up the climbing legs. It’s  a mile and about 1,000 feet in elevation up fromTimberline Lodge to Silcox Hut, and another mile-plus and about 1,500 more feet up to the top of the Palmer ski lift. Start from Timberline and walk up along the east edge of the ski area.

Salmon River: An easy stroll along the pristine Salmon River, one of five major rivers that call Mount Hood as their source, the Salmon River trail cuts through a massive old growth forest with cedars of unfathomable girth. The entire trail runs about 7 miles, but you can hike in just as far as you’re up for and still get the wilderness gist. More information.

Hood River Mountain: This one’s a little ways away from the mountain, just outside Hood River, but its view of the peak and the entire Hood River Valley is simply jaw-dropping. Just three miles roundtrip and 600 feet up, Hood River mountain affords you a view that usually takes a lot more effort to attain. More information.

This entry was posted on June 3, 2011 by onmounthood. It was filed under Hiking .