Too much to lose: Floras Lake and Blacklock Point

There is a place on the southern Oregon Coast where a cool Pacific breeze blows almost constantly off the steel-blue waters of the ocean, fanning out over fine brown-gray sand, bending and swaying long green blades of dune grass, brushing and bowling through stubby shore pines and tall inland Sitka spruce, reflecting off tawny sandstone cliffs that rise and tower over the wild shore. It is a place where purple and orange starfish and green anemones linger in salty tide pools, where seals  spy and brown pelicans soar; a place where gray whales spout off in the distance and blue herons sail overhead.

Gazing from some lookouts, a near glimpse of the earth’s graceful curve; from others, waterfalls and crashing, foaming surf.  There are occasional, subtle, tolerable signs of man: forest trails, colorful, far-off kite surfers, a small fishing boat, the clockwork pulse of the Cape Blanco Lighthouse under black skies spilling with stars.

Otherwise, this place, a sliver of shoreline south of Bandon near the tiny town of Langlois, is about as wild and as beautiful and as natural a place as is to be found along the entire Oregon Coast.

And yet, if commissioners from Curry County have their way, this place — it’s not hyperbole to summon the sacred here —  would be cleaved and cleared, paved and pounded, planted with rough and greens, pocked with bunkers, soaked in poisons, manicured, homogenized and standardized, all in the name of a little white ball and a big green dollar bill.

Yes, the commissioners from Curry County, fearing for the solvency, maybe even the very existence, of the entire county, want to develop some of the most pristine and breathtaking land on the entire West Coast into  . . . golf courses.

This so far informally proposed travesty came to my attention, coincidentally, on the very night that I returned home after an annual three-day backpack to this stretch of Oregon Coast with my family in late August. We’d just spent days in the sunshine, strolling the familiar sands — we’ve been coming back here for close to a decade — taking in the fresh ocean air, flying kites, slowing down, simplifying, refreshing. Late that night back at home, a headline in the Oregonian caught my eye. Its story dropped my jaw.

The short version: Curry County commissioners want to swap  68 acres of county land for 627 acres of Floras Lake State Natural Area, which has been part of the Oregon parks system since 1943. Through the swap, the county would create a new, 1260-acre county park. The land would be leased to a developer, who would then ransack it with two golf courses. One rendering shows a manicured green and two bunkers squarely on top of a dramatic sandstone plateau overlooking the Pacific. It is a landmark we know well.

The proposal also imagines an interpretive center — for what is a natural and scenic area without a center to interpret it? — and “improved” trails. Based on the county’s concept plan, that appears to mean paved.

All of this, the county supposes, would “create accessibility to public lands” and showcase “ecologically sound land management” and “preservation of native species.” It would also, in bold red letters, lead to “job creation” and “direct revenue for the general fund.”

To me, the entire idea is absolutely galling. Nonsense.

Thankfully, I am not alone. Public opposition seems to far outweigh support. Conservation groups such as the Kalmiopsis Audubon Society, the Oregon Shores Conservation Coalition, and the Portland-based Crag Law Center, all have lined up in opposition. And not only do people question the financial projections and oppose the destruction of  this one-of-a-kind treasure, but there is a fishy odor in the air — and it’s not coming from the Pacific.

For months, the commission kept its proposal — and its work with potential developers — behind closed doors. In late June, the Oregon State Parks Department discovered 16 pits within the Floras Lake State Natural Area that had been illegally excavated with heavy equipment. The pits were discovered over an 8-mile section of trail between the southern edge of Floras Lake and Blacklock Point, which just so happens to be the area under consideration for development. No one seems to know who did it; as of today, Oregon State Police are still investigating.

This misguided proposal seems like a long shot for another reason, as well. According to the Oregon Parks and Recreation Department, projects that transfer state park property out of the park system are rare and must meet a high standard — providing “overwhelming benefits to the state park system.” This proposal does not meet that standard at all.

Still, the very fact that this idea is out there and that it’s being given official attention is, at the very least, troubling. It’s also an idea that you hear over and over again. Repackaged, maybe, but the gist is always the same: Develop — i.e. destroy — our most wild, pristine and beautiful places in the name of economic progress and increased access. It’s been tried on Mount Hood. It’s been suggested for Mount Adams. It’s come again now to the Oregon Coast.

Well, not this time. Not this wild, beautiful and scenic place. This one is too close to me. It’s too important. It is too much to lose.

Every time I come here, I am awed. We’ve been bringing our kids here practically every year since they were born. We will keep bringing them here, and one day — imagine — they may bring their kids here, too.

And it won’t be to play golf. 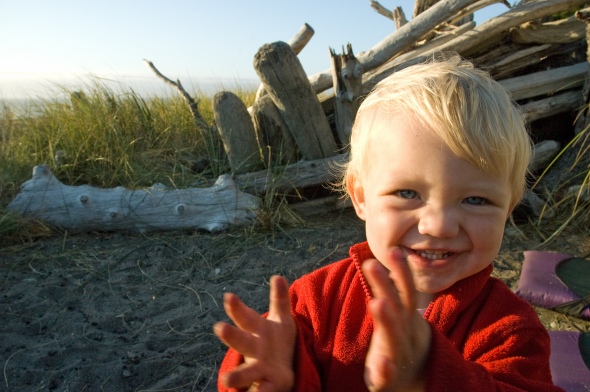 The Curry County Commission is holding an informational meeting at 5 p.m. today, Sept. 14, in Docia Sweet Hall of the Curry County Fairgrounds in Gold Beach. Members of the Oregon State Parks and Recreation Commission will be in attendance to hear details of the county park proposal.

Opposition comments can be submitted at any time to Chris Havel at the Oregon State Parks and Recreation Department (chris.havel@state.or.us)  and to Curry County Commissioners George Rhodes (rhodesg@co.curry.or.us), Bill Waddle (waddleb@co.curry.or.us) and David Itzen (itzend@co.curry.or.us).

More information is available at the ODPR Floras Lake and Blacklock Point page and at www.savefloraslake.com

This entry was posted on September 14, 2011 by onmounthood. It was filed under Conservation, Hiking and was tagged with camping, conservation, floras lake, hiking.