It’s Mother’s Day, and every year on Mother’s Day, I not only remember to call and send my love to my mom in Ohio, but I also think about a particular Cascade mountain. Not Mount Hood, but St. Helens, which lies about 60 miles northwest of Hood.

There’s an incredible tradition that happens every year on Mount St. Helens on Mother’s Day. Amy and I have been part of it twice during our time in the Northwest, and I have to say, it’s one of the most unique ways to express appreciation for the mother in your life that I’ve ever come across.

In honor of Mother’s Day 2012, here’s a column I wrote about that tradition back on May 18, 2002, when I was honing my chops as a reporter and photographer for the Canby Herald newspaper.

Last Sunday was Mother’s Day, and in honor of my wonderful mother, I sent a card, made the ritual phone call, and donned a blue and green tie-dyed dress for a climb to the top of Mount St. Helens.

Indeed, it was not your average Mother’s Day tribute.

But like all of those faithful sons and daughters who either bought Mom a bouquet or made her breakfast in bed on Sunday, I was not alone in my gesture of appreciation.

For one, my fiancée, Amy, was with me on the mountain. She, too, paid homage to her wonderful mother  — my soon-to-be mother-in-law  — by wearing a dress for the long slog up the Pacific Northwest’s most infamous volcano. (By the way, St. Helens, also known as Loowit, blew its top exactly 22 years ago today.) I reluctantly concede that Amy’s dress, with its purple, blue and pink floral patterns, was much more flattering on her than mine was on me.

And then there were the literally hundreds of other climbers who made their way up and down the mountain on Sunday. The majority of them were bedecked in dresses, skirts and gowns similar to those no doubt on display at Mother’s Day brunches — or weddings, proms, square dances or Scottish caber tosses — across the country.

On our way up and down, we saw polka dots and stripes, flowers and paisleys. There were miniskirts, bridesmaid dresses, kilts, and old schoolmarm frocks. We also noticed costume pearls, a hot-pink feather boa, and at least one blonde wig.

Lest the reader be mislead, these garments were worn, in most cases, over the standard climbing ensemble. Under the sunshine and blue skies of last Sunday, that included stiff boots, synthetic pants and shirts, backpacks, sunglasses, and the most essential of accessories, the ice axe.

There were, of course, those fellow climbers who were unaware of the fashion protocol of the day. One bewildered alpinist heaved up to us just below the summit, a perplexed look on his face.

“Can you explain something to me?” he asked. “What’s with all the dresses?”

We smiled between gulps of water and wished him a happy Mother’s Day.

Rumors abound as to the origin of the Mount Saint Helens Mother’s Day tradition. Perhaps it began with the Bergfreunde Ski Club, a Portland-based ski club formed in 1966 to promote skiing and other recreational activities. I called these “mountain friends,” but they weren’t sure if their club had formally come up with the dress idea or not.

I next tried the Mazamas, one of the larger and more well- known mountaineering groups in the Northwest. Their club, the name of which is Nahuatl for mountain goat, has been associated with the local mountaineering scene since July 19, 1894. It was on that date that prospective members of the club first convened on the summit of Mount Hood.

“It may have just been one of those spontaneous things that caught on,” one club member said of the Mother’s Day tradition. “Who really started it, I don’t know.”

There’s also the Ptarmigans, another climbing club that has been exploring the Cascades since the mid 1960s. Mike Dianich, a member and longtime mountaineer who has climbed Saint Helens 22 times as of Sunday, said other than the local climbing clubs, he didn’t know who may have slipped into the first Mother’s Day dress on Mount Saint Helens.

But if the origin of the tradition remains a mystery, the reasoning behind it is a bit more definitive. Simply put, those who climb the 8,300-foot volcano in a dress on Mother’s Day are honoring their moms, thanking them for all they have done over the years.

It is also a gesture of obeisance from those sons and daughters who live far away from their mothers; from those who, like me, cannot express their gratitude in person every year on Mother’s Day.

So this year, as Amy and I plodded more than 5,000 feet up the flanks of St. Helens in our dresses, I thought of my mother and how she has helped me become who I am; how she has shared her kindness with me and given so much of herself  — all so that I can enjoy the life that I do.

And when we got to the top of the mountain, with Spirit Lake down below and Mount Rainier and Mount Hood floating in the distance, I looked east toward Ohio, and waved to my mom. 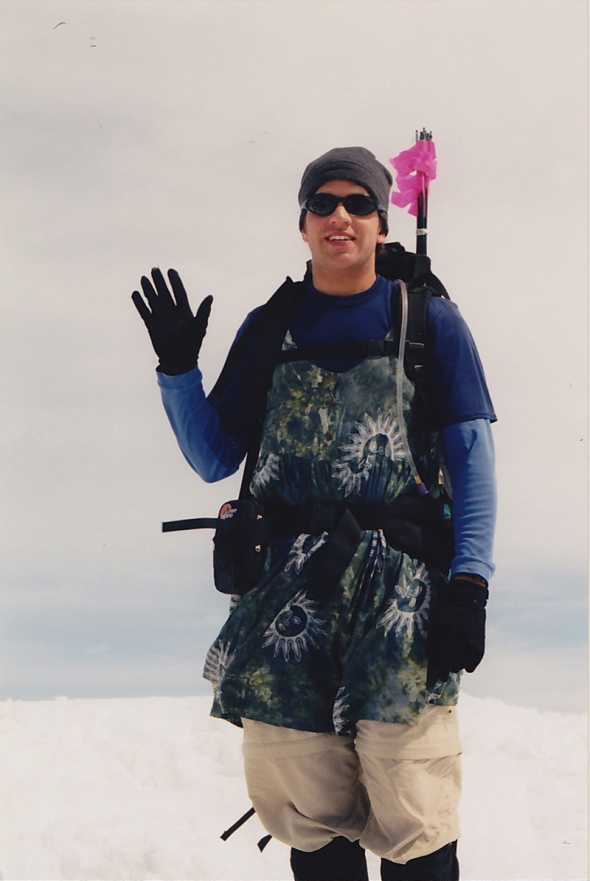 This entry was posted on May 13, 2012 by onmounthood. It was filed under Climbing and was tagged with climbing.