On Mount Hood at Powell’s City of Books

When On Mount Hood initially came out two years ago, we launched it at Powell’s on Hawthorne. And while that was a great event and a great venue to launch a book — and while this may sound a touch petty and ungrateful — I’d be less than honest if I said there wasn’t a part of me that was really hoping it could have happened at the real-deal Powell’s, Powell’s City of Books on Burnside. It’s kind of the dream spot that a lot of writers have in mind.

Well, maybe for the next book, I remember thinking at the time.

The next book did come along — the paperback version of On Mount Hood — and with it the incredible opportunity to kick it off at Powell’s on Burnside.

We did it last night in the storied Pearl Room, and it was great. 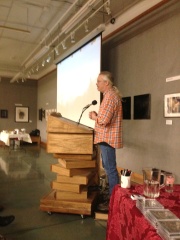 It was also Hood photographer and artist Gary Randall, who shared some of his favorite and most amazing Mount Hood images.

Gary’s been photographing the great Northwest outdoors for decades, and his work has been published and posted and shared all over the place.

He’s got amazing pictures from all around the mountain, and some engaging stories too, from shooting a fierce lightning storm from inside his truck one stormy night to catching the Dollar Lake fire two years ago right when it  blasted a massive mushroom cloud up into the sky.

The night was also Jon Tullis, the spokesman for Timberline  who’s worked at the landmark lodge for more than 26 years. Long a huge fan of the lodge and the mountain, Jon shared some thoughts and a couple short videos celebrating the lodge, including one on the book he wrote and edited, Timberline Lodge: A Love Story.

And last night was also the 70 or so people who turned out to celebrate the beauty and glory and the singularity that is Mount Hood.

There are a lot of people out there who love and enjoy and revere that mountain, and a bunch of us got together at Powell’s last night because of it.

(Thanks to Sue Bartz and John Burton for some of the event pictures.)