I hate to hop on the gifty bandwagon and all this time of year, but I got a super cool early Christmas gift a couple months ago that I’ve been eyeballing for years now. And to me, it’s one worth sharing.

Amy got it for me when we stayed up at Timberline Lodge back in October as part of the Friends of Timberline annual dinner, which was just grand.

I’ve seen and admired them in the gift shop at Timberline for years, and then when I was working on the Mount Hood book, I actually met the guy who makes them — and he ended up in the book, too. So that, along with the fact that I love nothing more than an a blazing fire this time of year, made this particular gift pretty unique.

It’s the Ram’s Head Fire Poker, a hand-forged wrought iron beauty fashioned after some of the larger fireplace tools at Timberline. (Glad I got one, as it looks like they’re sold out right now.) I’m not 100 percent sure, but there’s a pretty good chance this one was made by Darryl Nelson, the renowned Northwest blacksmith who has done much of the restoration and replication work at Timberline, including these fireplace tools. 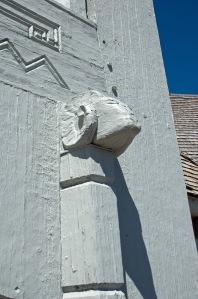 It was Darryl who I met up at Silcox Hut one day while researching the book. He shared some great stories with me, including one about people occasionally stealing these pokers out of the guest rooms. (A few folks have even reportedly tried to hustle them out of the lodge by tossing them out their window into the snow; they often can’t find them after they’ve checked out, and only in the summer, when all the snow melts, do lodge staff come across them.)

The ram’s head is, of course, one of the animal symbols prominent throughout the lodge, along with beavers, eagles, marmots, coyotes, deer, and so many others.

So anyway, I’m set for this year already. I’ve used my gift quite a few times already this season, and no doubt will put it to good use throughout the rest of the cold weather this year, next year and many more to come.

I think it’s the kind of gift that’s going to be around and appreciated by myself and others this time of year for a long, long time.