Will Mount Hood — aka Wy’east — get the nod?

Wednesday’s the big day, the day Trimet will announce what the newest bridge to span the Willamette River will be called. 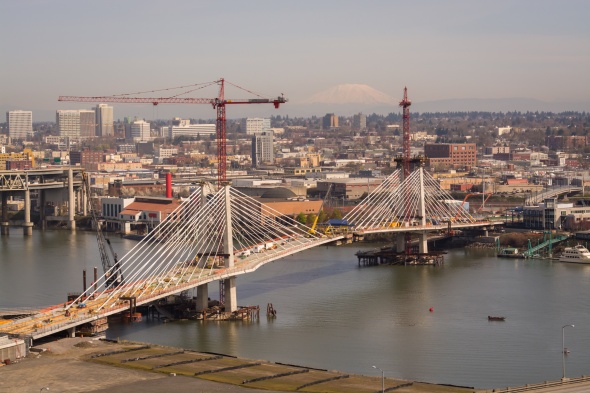 Portland’s transit agency went through a pretty extensive public process to solicit possibilities, finally narrowing it down to four at the beginning of this year. The finalists: Abigail Scott Duniway; Tillicum Crossing; Cascadia Crossing; and Wy’East. The latter of those is believed to be one of the Native American names for Mount Hood. (I spoke on OPB’s “Think Out Loud” with some other folks earlier this year about the history behind the name.)

Whether or not Hood will get the honor — and whether people will even call the bridge by its technical name or not — Wy’East is still a pretty intriguing name, one with some dramatic Northwest mythology behind it. So, what does Wy’East mean and where did it come from? Here’s how I wrote about it in On Mount Hood, based off research I did, including a reading of C.O. Bunnelll’s 1933 book, Legends of the Klickitats:

According to the lore of the Klickitat, who lived along the north shores of the Columbia River, native peoples used to be able to cross the river over the sacred Bridge of the Gods. (Various landslides throughout time — one as recent as a few hundred years ago — have actually dammed the river and allowed fleeting passage by foot, so this part of the story may not be entirely legend.) Upset by tribes that began to feud, the Great Spirit first doused all sources of fire, save for the one kept burning by an old and ugly woman named Loowit. She would share her flame with those who came in need of a spark. Pleased by Loowit’s kindness, the Great Spirit granted her wish of everlasting youth and beauty. The new dish, however, soon became quite the target, and two of the Great Spirit’s sons, Pahto, who ruled the north, and Wy’east in the south, unleashed a terrible war to gain her affection. They hurled fiery boulders at each other and torched the land all around.

Furious at his offspring, the Great Spirit destroyed the bridge over the river and turned all three of the feuding lovers into volcanic peaks: Loowit became the mountain we know today as Mount St. Helens, Pahto is Mount Adams, and Wy’east is Oregon’s Mount Hood.