Head for the mountains

Just as there is great food to be had around Mount Hood, so too are there great beers.

Certainly, just about anything hits the spot after an all-night climb, a three-day backpack, or even a lazy day on the Muddy Fork of the Sandy River. But when discretion is yours, there are plenty of fantastic, locally-made brews available to render mass-produced swill entirely irrelevant.

Hood River’s stalwart brewery — and the third-largest in Oregon — Full Sail has always been a favorite for post-hike unwinding on the north side of the mountain. (I profiled the brewery’s founder and CEO in 2010 too.) There was a time when the only reason to visit this scenic brewery and pub overlooking the Columbia River was the beer — no real problem with that — but they’ve since renovated the pub and broadened the menu, upping the ante. I’ve long been partial to their hoppy and refreshing IPA, but their Session lager, in its stubby 11 oz bottles, is great for river days, and Wassail is one of the best holiday brews every yuletide season. 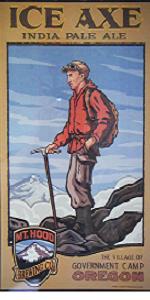 A little pricey at times up on the mountain, Mt. Hood Brewing Co. nonetheless brews a few fine beers, namely their Ice Axe IPA. And not only does a pint taste even better when you score a window seat in the Ram’s Head Bar with a clear view of Mount Hood just outside, but their old-school logos and alpine-inspired names — Hogsback Oatmeal Stout for one — make Mt Hood Brewing’s just the right kind of libations for the mountain.

Now in its fourth year, Double Mountain Brewery in Hood River makes a heavy IPA — Hop Lava — and they fire a great pizza. Even better: this small brewery’s beers are on tap at its Hood River pub, at more than two dozen local establishments, and at more than 100 places in the Portland metro region.

Over the years, we’ve spent a lot of time on Mount Hood, but also a fair amount of time driving to and from and around it. And so, after long hikes up to McNeil Point, afternoons climbing at French’s Dome, long, scenic drives around the Mount Hood loop with out-of-towners, and day trips to canoe, ski, sled, or just visit, we’ve sampled a few of the local restaurants and watering holes around the mountain. Some have been forgettable, others have become go-to favorites. A few of the latter to consider next time you’re in the area:

Anyone who’s driven by Calamity Jane’s in Sandy on their way to or from the mountain and not been at least intrigued to know what that inviting blond with the burger on the side of the road is really all about must have been asleep at the wheel. We pulled in years ago to check it out, and now no hike under 5 miles ends without a Calamity burger on the tail end. The place is homey and traditional, the menu packed with close to 40 burgers served in three different scales: the third-pound City Slicker, the two-thirds-pound Wrangler, and the just plain scary one-pounder known as the Trail Boss. Some of the burgers sound more novelty than anything —the George Washington has sour cream and pie cherries — but paired with fries and giant 34 0z Bridgeport IPAs, just about anything from Calamity’s caps off a day on the mountain in a satiating, near gut-busting way.

There came a time when it seemed as if we were running out of options for better food around the mountain. But then someone recommended El Burro Loco in Welches, and that changed that. Unassuming but friendly, this Mexican joint has fantastic, reasonably priced food, a huge beer selection — at least five different IPAs on tap last time we stopped in — and chummy staff. Great for when you’ve not earned a Calamity burger but still want some real satisfaction.

When you’re not rewarding yourself for a long and dirty day on the trail but instead seeking out a touch more refinery, 3 Rivers Grill,  on the north side of the mountain in Hood River, makes an excellent choice. A little more upscale but still laced with Oregon informality, 3 Rivers sits high on a hill lot in downtown overlooking the city and the Columbia River. Outside seating is scenic and comfortable, and the salmon I had there on our first visit was something I’ve not soon forgotten.

Of course, there are a ton of other options, including breweries, pizza joints, historic lodges, and even a renowned donut shop. But this site is new. We’ve much to cover. And we will.