It’s one of the worst and most heartbreaking climbing accidents ever to happen on Mount Hood.

May 1986. Nine people dead, two adults and seven students from Oregon Episcopal School, a private Portland prep school. All of them had been a part of a climb of Mount Hood through the school’s Basecamp Wilderness Education Program.

A storm descended on the mountain. Some members of the climbing party turned back. Others didn’t and were pinned by the weather, forced to cram into a snow cave for shelter. When rescuers finally found the buried cave three days later, only two students were left alive.

One of four Bell UH-1 Iroquois helicopters involved in the OES search and rescue mission on May 15, 1986 — the day searchers finally found a buried snow cave and two survivors. Courtesy Ric Conrad/Wright Collection.

It’s a painful story that’s been told in a few different formats over the years, largely in newspaper and magazine stories. A synopsis of it is in On Mount Hood, but no one’s ever attempted to retell the entire story as a standalone book.

Portland-area author Ric Conrad, who also wrote Mount Hood: Adventures of the Wy’east Climbers 1930-1942, spent the past four-plus years researching the OES tragedy with his wife, Sheri, poring over records and conducting close to 40 interviews to retrace the dramatic events that unfolded on the flanks of Mount Hood over four days in May 1986.

His new book about the disaster, Code 1244: The 1986 Mount Hood Tragedy, is an exhaustive and gripping dive into the OES disaster: what happened, who was involved, the mistakes that were made and how searchers managed to find a miracle of sorts just as their mission was on the verge of being called off for good. It’s also got new information and never-before-published photographs of the fateful climb and the rescue effort that ensued. 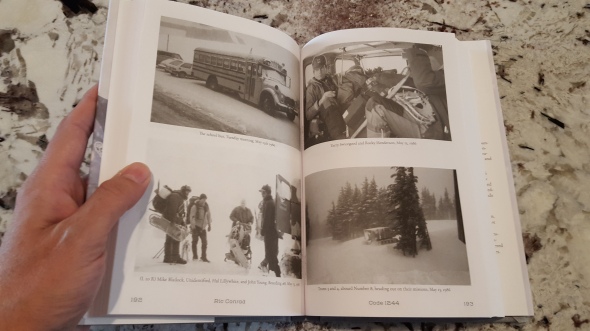 Some of the photos inside Conrad’s new book. Courtesy Ric Conrad.

Conrad was kind enough to keep interested parties apprised of the progress of his work, from its initial days through its publication earlier this month. He was also up for what I’m going to call an exclusive interview about the book. (We did a similar one back in 2015 for the Wy’east Climbers book.)

Enjoy that here, and then pick up a copy of Code 1244 if you’re someone who wants to know just how the OES tragedy on Mount Hood unfolded.

What motivated you to write about what’s considered one of the saddest and most memorable tragedies on Mount Hood? If anyone has a touch of gray in their hair, we remember the tragedy, yet scores of questions continued to linger in the halls of our regional climbing clubs. The family members of the missing climbers also had their questions and concerns. There were mysteries here that I wanted solved, answers that could benefit others. The fact that the search and rescue (SAR) volunteers were aging also had to be taken into consideration. If I waited too long to begin this project, the leaders of this large operation might not be around to share their stories. The timing just seemed to be right.

This story has been told and retold over the years, but never like this. What are some of the biggest revelations or new pieces of information that came from your research and that appeared in the book? For family and friends of the missing climbers, the two biggest questions were: Why did it take so long to locate the snow cave and why was there so much confusion on Wednesday morning? I believe I was able to provide answers to both of those important queries.

I was able to outline the perfect storm of miscommunication that occurred on Wednesday morning, May 14, 1986. Equipment malfunctions, two different handwritten logs being kept at the same time, and Air Force military protocols — which prevented certain messages from being transmitted over an open radio channel — all contributed to the agonizing confusion among family members.

The book clearly explains why it took so long to locate the snow cave. Throughout Tuesday morning, SAR workers were exploring the route the missing climbers had taken during their ascent. A consultant then hiked out of the blizzard and advised authorities that the missing party was holed up in a snow cave — on a completely different glacier. Even though multiple search teams tried in vain to reach the glacier through the storm, they were unable to even see the terrain clearly until the following morning. As the missing climbers didn’t have an altimeter with them, it was anyone’s guess as to what elevation the snow cave had been constructed. Members of the public had no idea how much terrain the searchers had to cover. Differences in snow probing techniques — coarse versus fine—additionally factored into minor delays, which all added up to additional hours spent on the mountain.

Was it hard, 33 years after the tragedy, to find and interview the people who were involved in it? Surprisingly, no. I began by interviewing the three members of Portland Mountain Rescue (PMR) who are still serving their organization. They were able to provide me with the contact information of other key rescue personnel, and it sort of snowballed from there. From the families of the missing climbers’ perspective, it began with Frank McGinness, whose son was on the climbing team. Frank put us in touch with a former student at OES, who put us in touch with another member of the climbing team. That man put us in touch with yet another climber and, again, our network of contacts expanded, until my wife and I had interviewed thirty-seven people.

Who were some of the personalities that stuck out most as you were compiling interviews?  Barry Wright certainly stands out. He was co-chief for PMR at the time. After our first recorded interview, he handed me a duffle bag, filled with primary source material. “I’ve been waiting for you for thirty years,” he remarked. It was an incredible compliment, but also a charge — provide an accurate version of events. I took that responsibility seriously.

Author Ric Conrad (right) with Barry Wright, a search and rescue volunteer with Portland Mountain Rescue who was involved in the search for the OES climbers in 1986. Courtesy Ric Conrad.

Were some folks reluctant to talk? Naturally. For some family members, the tragedy might as well have taken place yesterday, and we certainly understood that. We respected their privacy. Having said that, one father was overjoyed to assist, stating that “No one is talking about my boy anymore. I want him to be remembered.”

Did you try to talk to Brinton Clark, Giles Thompson or Ralph Summers (three of the survivors of the tragedy)? Yes, all three. Dr. Clark gave a brief interview in 1996, but to my knowledge, she has declined to be interviewed ever since. We learned from Thompson’s mother that he declined to be interviewed. We tracked down Summers and mailed him a packet of information and a request for an interview. We never heard back from him but respect his privacy — his right to keep his memories to himself.

Similarly, did you reach out to OES? If so, what was their response to you writing this book? The current headmaster of OES took my wife and I out to lunch, where we had a very frank and open conversation about the topic. I wanted to assure her that I had no agenda here. This was a search and rescue book and, now that it’s published, I am confident I have allayed any fears or reservations the school might have had. I think Tom Stringfield, of Portland Mountain Rescue, says it best. “The death of children is a difficult subject, and the author strikes a good, delicate balance between sensitivity and objectivity.”

Do you feel like you included everything in this book that you could, or did you have to leave a lot out? Oh, this book could have easily ballooned to 800 pages or more. The interviews were so interesting, we could have kept on going, but where do you draw the line? We felt we did a great job of what I call targeted interviewing. We tried to interview at least one member of each of the SAR teams, to obtain a feeling of what it was like to be in their boots, on their specific mission.

Ed Hall and Mark Kelsey on the summit of Mount Hood. The longtime climbing partners were later involved in the OES search and rescue mission.   Courtesy Ric Conrad/Kelsey Collection.

Can you talk a little about your approach to writing and your style? This book reads very much like a detailed police or incident report; curious if you thought about taking any other approaches and why you ended up going with this one?  I started writing this book as if it was current day, and the witnesses were recalling their experiences. I was jumping back and forth, so many times between these two timelines —2014 and 1986 — that the writing became jumbled and difficult to understand. My wife suggested I try narrative nonfiction, and it was clearly great advice. With narrative non-fiction, as you read the book, it “is” 1986. Everything is in the present tense. I think that style makes it easier for the reader to follow the rescue and recovery operation.

How did you land on the title? (I know what the code is, but curious about how you ended up with that as the title)?  I kept coming back to the fact that there were two logs being kept in real time. Deputies from the sheriff’s department were maintaining one, while PMR handled the other. Without giving away too much of the story, I always found it amazing that at least one deputy recorded in his log the awful truth of what had been discovered. Somehow, that information was not relayed to PMR leaders who were only a few feet away. That Wednesday morning was the epitome of madness and confusion, and Code 1244 just seemed to encapsulate the entire tragic affair.

I know you know the mountain really well. Have you climbed it yourself? Oh, sure, but after reaching the summit three or four times, you recognize it’s just an incredibly small slice of real estate.  The mountain has so much more to offer. You begin to branch out and explore all manner of pockets of terrain: Langille Crags, Illumination Rock, Paradise Park, Cooper Spur, Mississippi Head, the Timberline Trail, etc.

What do you think is the legacy or lesson of the ’86 tragedy, if there is one? I think the lesson learned was that even teenagers are simply too young to speak up for themselves and turn around when they feel they should. In 1986, the kids followed their designated leader who — probably suffering from the onset of hypothermia — kept moving the team higher and ever higher.

What else do you want people to take away from this book? Although people will learn a lot about the search and rescue efforts by reading my book, we can’t overlook the incredible efforts demonstrated by the children themselves. Susan McClave, for example, shared her body heat with a fellow teen suffering from hypothermia. She also held the compass and led the team down from the upper reaches of Triangle Moraine. She barked orders inside the snow cave, ensuring people continued to shift their body positions in order to maintain circulation in their limbs. That’s a seventeen-year-old girl we’re talking about. Incredible presence of mind and strength of will. These kids deserve to be remembered. 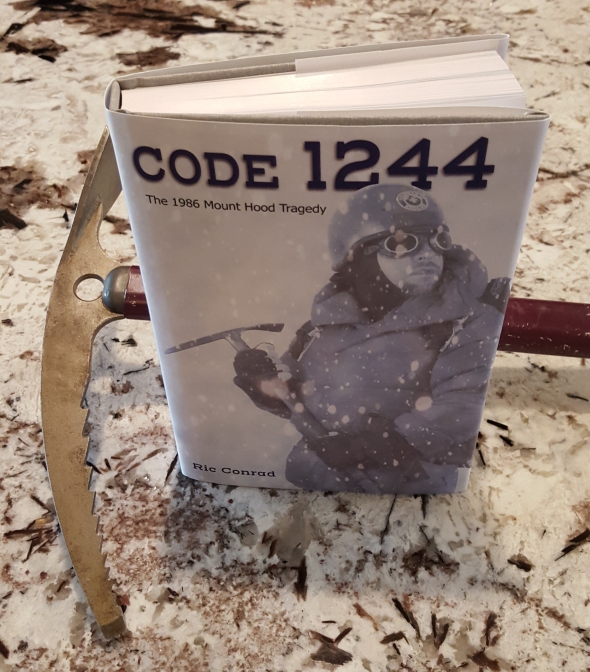