It was bound to happen.

We called it last year when, after a night in a favorite campsite along Mount Hood’s Sandy River, we had to clean up piles of trash and clothes and broken glass and all the other debris that a rowdy group of partygoers had left in their wake in the site next to ours. This, despite the fact that the Forest Service had been monitoring the area and had posted signs warning campers that these popular sites would be closed if people didn’t start taking better care of them.

The only surprising thing, really, is that the sites stayed open as long as they did. We returned earlier this summer for a night, and though it was nice, there was enough garbage about to make the entire area unpleasant, if not downright repulsive. Luckily, we have a secret spot that takes a little more energy to get to, and so the appeal that originally drew us to the Sandy River is still attainable.

Even so, it was kind of a bummer to pull up for our annual family camp with a bunch of friends last month, expecting to find our favorite site and instead finding this:

The Forest Service had, apparently, finally had enough, and sometime between mid August and mid September, they’d gone in and rendered the sites and the access roads to them completely unusable and impassable.

We were all a bit deflated at first, but we’d all known it was probably coming to this. And really, it was getting out of hand and the Forest Service had to do something to keep this place from becoming a summertime landfill. It’s too bad, but that’s what happens when people don’t care. And luckily for us, we’re pretty crafty about finding other great campsites — and taking care of them.

Every now and then, I post up a couple favorite shots of Mount Hood. I did it here and here, and now I thought I’d do it here too.

Hood from White River. Nothing incredibly special about this one, but it is the kind of image that shows just how beautiful a January day on the mountain can be. 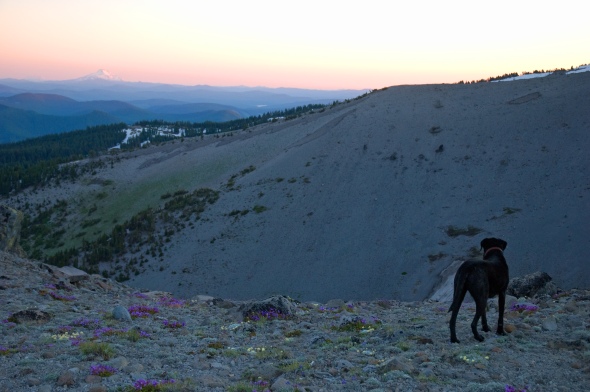 This one’s not actually of Mount Hood, but from it: Oliver scanning the horizon and Mount Jefferson from Gnarl Ridge. 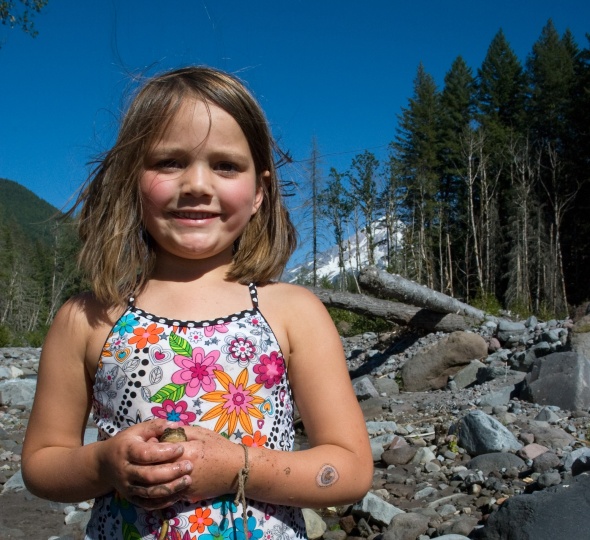 A frog, my daughter, and Mount Hood above the Sandy River.

Just like that, the chance of any really nice, warm, Indian summer-like weather here in the Pacific Northwest has left us. While that may be a little bit of a drag, it’s also fairly fine. Not only have we so far had a relatively mild and enjoyable autumn, but we also had a warm and sunny stretch near the end of the summer that almost made up for the lingering gray that hung around far too long early in the season.

And from that last leg, we also have the fond and bright and warm  recall of a few of those days. One we spent on the banks of the Sandy River with a stunning view of Mount Hood. 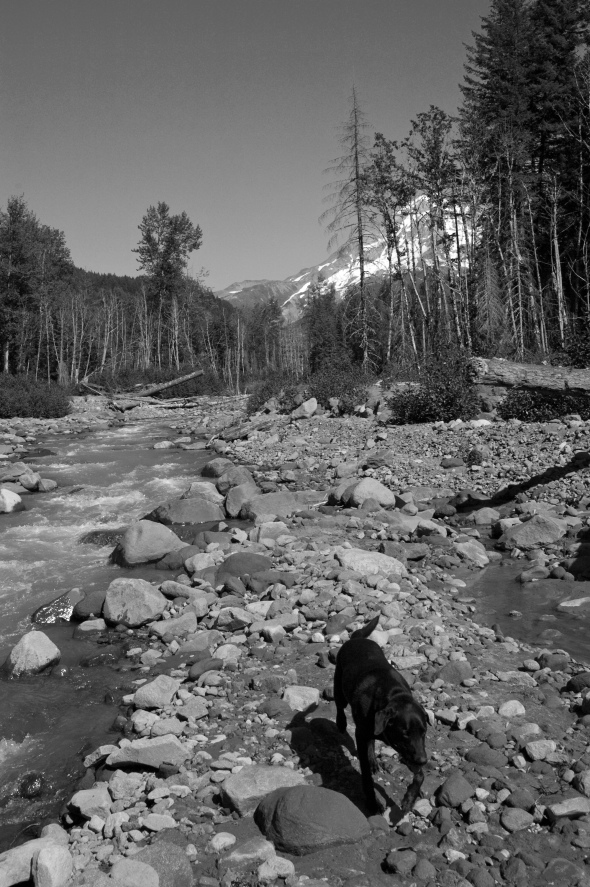 Another found us in pure summertime mode, rowing a leaky rental boat around the picturesque Lost Lake — also with an unmatched shot of the mountain — soaking in every bit of the fleeting season, as if storing up the sunshine and winds and refreshing waters for the inevitable days  ahead,  the cold and drizzly days, when nothing sounds more inviting than rowing a leaky boat around an amazing alpine lake in the middle of the summer.

The Mount Hood National Forest was host to one hell of a party a few weeks ago.

We’d pitched our tent in a favorite area out near the rushing Sandy River, a place we’ve spent many a night over the past few years. The specific spot that we usually favor was already taken when we rolled up, but no worries. There were a few other options nearby, and the one we landed in boasted a nice view of the mountain through the trees and more shade than the old faithful spot.

This place has been great to us ever since we stumbled on it a few years ago. Because it’s not a campground, but instead a handful of dispersed sites, it’s relatively free of the crowds that flock to the more developed areas. And though you don’t have to hike in to get to it, it’s got a measure of serenity and beauty that almost hints at wilderness. Plus, the river’s just a short jaunt away. 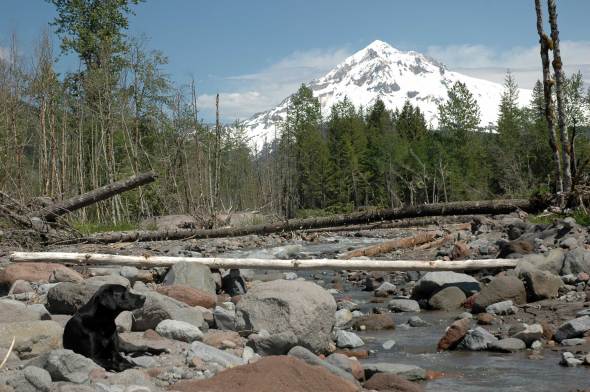 Once we had our camp on in the late afternoon hours, the cars started rolling by. First one. Then another. And another. A Jeep with four young guys in it. A pickup truck rumbling with bass. A little sedan that had no business on such a rough road weighted down with folks.

The party, in the site a couple down from us, kicked off as the first cars pulled up. A car door would slam, some loud greetings would exchange, and then the beverages would crack open. I know how it works. I’ve been to my fair share of those, especially back in the pre-21 days. This was one of those.

It raged throughout the night, as the sun set, the mountain faded, the stars shone. Loud laughter, obnoxious machismo, breaking glass. Because we were a few sites away — and because we remembered what we had been like at that age — it wasn’t so bad. Just different than our normal escapes up there. Louder, mainly. And surprisingly, we just about outlasted the rowdies. By the time we retired from our own quiet campfire, it was pretty close to silent throughout the woods.

The next morning, the same cars we’d watched roll in the night before rolled back out in the early morning sun. My five-year-old daughter and I took a walk down the dusty road to survey the damage. And that’s when I changed from a slightly annoyed but somewhat understanding neighbor into an incredibly disappointed and perturbed curmudgeon. There was trash along the road, broken glass in the bushes. A pair of pants with who knows what on them sat crumpled up under a tree. Toilet paper streamed from the manzanita, camping chairs lay broken and bent on the ground, and the last car to leave loaded up the fire pit with trash, set it ablaze and drove away.

It was not pretty.

It needed to be cleaned up. I didn’t want to do it, but I knew we’d probably be back up for another weekend sometime this summer. I also knew that the Forest Service  had been tolerating these unregulated sites, but that they were beginning to rethink that approach. Posted on all the sites in the area, for the first time since we’d camped there three or four years ago, were some unfortunate signs.

After mulling it over at breakfast and not being able to leave it alone, my daughter and I grabbed some plastic bags, headed back over to the trashed site, and cleaned it up. Five garbage bags, two wrecked camping chairs and a couple bucks worth of returnables later, it looked hospitable again. Probably still needed a good rain before I’d pitch my tent there again, but it was on its way.

I’d like to think that when I was that age, I would have been a little more conscientious about the things I did and didn’t do, but to be honest, I’m not sure I would have. Back then, a lot of it was about having new fun and, sometimes, not holding onto any evidence. I understand that. But years later, my perspective has swung over to the other, more adult and responsible side; the side that cannot fathom how anyone could leave a campsite just a few hundred yards away from the Sandy River and with a lovely view of Mount Hood in such littered disarray.

Who knows how many more scenes like that the Forest Service will have to walk up on before they do actually close those beautiful sites to everyone. I consider myself lucky to have found a place like this, to be able to enjoy an escape like this.

It’s easy to take these places for granted. It’s best not to.