A South Side Climb

Mount Hood, with 8,000-10,000 prospective summit climbers annually, is one of the most-climbed mountains in the world. Most of the people who take it on do so up the South Side route, a roughly 3-mile climb that ascends 5,000 non-technical feet from Timberline Lodge to the 11,239-foot summit. The most welcoming season is mid to late spring, when the bad weather is mostly gone but the good snow’s still there, and the prime time to head out is in the middle of the night. The goal is to reach the summit right around sunrise, not only because that’s a beautiful time of day to be standing on top of a mountain, but because that’s when Hood is still frozen solid and the risk of rock and ice fall is substantially lower than it is later in the day.

What follows is a trip report I wrote up for the Oregonian earlier this year about a climb that some friends and I made up the South Side in 2010. It was one to remember.

The night is, finally, perfect.

Brisk but bearable, a hint of alpine wind, a blue-black sky that would be strewn with stars if not for the nearly full and golden moon rising in the east. From the parking lot at Timberline Lodge, Mount Hood fades into the last light of the day as snowcats quietly rumble up the Palmer Snowfield, their headlights inching slowly, like satellites across an icy expanse.

It’s well past 10 p.m., late June and, it seems, the first weekend of nice weather of the entire season. Since mid-May, my friends Alan, Daryl, Trin and I have been planning and canceling a climb up Hood’s South Side, calling it off week after week for mostly meteorological reasons.

But now, summer has finally arrived, and we are at last suiting up, stretching out and stepping from pavement onto snow. We’ve all done this before — my very first time was in 1999 — but it’s been awhile, so it seems both familiar and new again.

We stop to catch our breath at the top of the Palmer lift at 8,500 feet and confirm what we’d already suspected: everyone else who’s been postponing their climbs is taking advantage of this first nice stint, too. Supposedly 10,000 people climb Mount Hood every year. Tonight, I believe it.

Now in crampons, our group at first stays together as we climb toward the most prominent reminder of Hood’s last eruption 200 years ago, Crater Rock. But we’re catching up to people and people are catching up to us, and the bodies begin to blend. There are times when I’m sure I’m following Daryl, only to find out it’s Alan; times when I think that’s Trin right behind me until a friendly stranger passes by.

A few hours in, the moon has crested its arc in the southern sky, but something is different about it now. What had been a moon one day short of full is now more of a waning gibbous, with the right edge shaded over. It’s subtle at first, but the higher up we get, there’s no mistaking it: a lunar eclipse.

At the base of Crater Rock, it gets even better. The sunrise slowly and silently projects Hood’s massive morning shadow onto the southwestern sky. It’s always been one of my favorite spectacles, but now, with the early sky pale blue, pink and orange, the dark mountain shadow rising like a pyramid and the eclipsing moon hanging over it all, there is little to do but stop and wonder.

Not for long though. A sluggish rope team has just crept up to our vantage point. Why they are on a rope here, atop this gradual slope, we’re not sure, but we take it as a sign that we better keep moving.

Trin drops back a little but isn’t far behind as we cross the Hogsback and head up the broad, steep face known as the Old Chute. It’s amazing how many people are already ahead of us, inadvertently kicking down ice chunks, clogging the chute and otherwise imparting a real sense of unease. Rope teams inch up; one has eight people, most of them teenagers without packs who have tied the rope directly around their waists.

We skirt some of these uneasy teams by heading out of the boot track. It makes the climbing much faster, but also steeper and harder. By the time we hit the summit ridge, Daryl has had enough, so he enjoys the view from there. I hear him say something, but my focus is absolutely frozen on the path in front of us: for the first 25 feet of the traverse over to the true summit, the narrow track is edged on the left by little more than fresh air.

The summit view is as expansive as always: St. Helens, Rainier, Adams, Jefferson, the Three Sisters, everything. We relish it, but briefly. More and more people are on their way up, so Alan and I stand atop Oregon just long enough for a photo, a refresh and a high five. 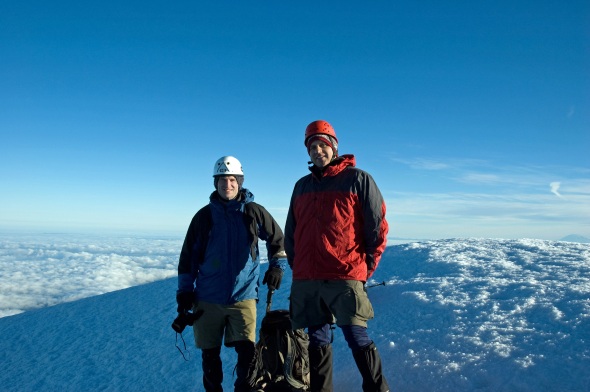 On the way down, we pass Trin, who’s gotten stuck behind the slow-moving train. He’s done Hood by himself before, but I still can’t help but feel that we should have all stayed together. We didn’t though; we just didn’t.

The climb down the chute is sketchy. Not only is it steep, but it’s crowded as an amusement park. There are rope teams coming down and going up and tumbling ice all around. People make lighthearted comments to ease the tension, but it’s neither the time nor place. I vow, once more, to never again climb the South Side on a weekend.

Finally, we make it back down to the relative safety of the Hogsback. Daryl and Alan head down, but I hang there in the mountain sunshine to wait for Trin. At one point, I count at least 62 people in the chute. Crazy.

At last there’s Trin in my telescope, making his way down the chute so, reassured, I turn and take the first of many more steps back down the mountain.

This entry was posted on May 15, 2011 by onmounthood. It was filed under Uncategorized .