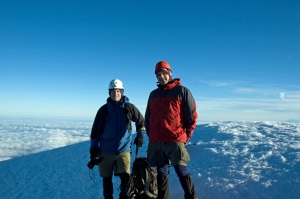 Alan Rankin and me on the summit of Mount Hood in 2010.

When I moved to Oregon in 1997, I had some hiking under my belt and a few minor walk-up climbs — things like 9,700-foot Mt. Tallac overlooking Lake Tahoe, a few hikes in Desolation Wilderness, a bit of the Grand Canyon and other trails here and there. But I’d never climbed a real mountain or even thought much about it.

But almost from the first time I saw Mount Hood, something about it pulled me in. And when I heard that the summit was attainable by almost anyone with a reasonable amount of fitness, knowledge and luck, I was sold.

I first took in the world from the top of Mount Hood on an amazing day in May, 1999. May 23 to be exact. So in honor of the 12th anniversary of that first of four or five climbs up Mount Hood, here’s an excerpt from the “Up the Hill” chapter of On Mount Hood, which recounts that experience and explores the unique climbing scene on Mount Hood.

Cold. Crystal clear. Beautiful. May moonlight magnified the white mountain against a black sky scattered with stars. The breeze was light and fresh, cool and invigorating in the lungs. I felt alive and strong, tense with the energy of anticipation. Everyone was there on Hood’s south side, huddled around the climbers’ register in Timberline’s Wy’east Day Lodge: ten students, two assistant guides, and a climb leader, all of us a party of Ptarmigans, a Vancouver, Wash., mountaineering club that as of 2009 had embarked on indefinite hiatus after more than 40 years of Cascade enjoyment.

But this was 1999 and the club was invigorated, as were all of us who were there at 6,000 feet about to set out up the South Side route on our first climb of Mount Hood. For the past month or so as part of the Ptarmigans’ basic mountaineering course, we’d been poring over The Mountaineers’ climbing catchall, Mountaineering: The Freedom of the Hills, and gathering in a high school auditorium for weekly sessions on gear and fitness, hydration and altitude, and what to do if we’re caught in an avalanche. (Basically swim for your life and hope like hell there’s an air pocket in front of your face when the whole mess slams to a halt.)

Weekends had been spent on progressively more difficult hikes: Saddle Mountain in the Coast Range and then to the Columbia River Gorge for Hamilton Mountain, Dog Mountain, and finally, the 12-mile circuit of a beast whose name alone adds thirty pounds to your pack: Mount Defiance. Contrary to what might seem an obvious inference, this meanest of mountains in the Gorge got its name not from its burly 4,800 feet of elevation, but rather for defying the springtime elements and holding its snow later into the season than any other hill alongside the river.

We’d knocked off Defiance a couple weeks earlier and been greeted at the summit with sunny blue skies and a view of Hood so massive I felt like I could reach out and lay my hands on the mountain’s north face.

There on the south side of Mount Hood at 11:15 p.m., spirits were high, the chatter lighthearted and excited. Everyone had a climber’s swagger on after signing in. First-timer’s swagger, of course, but no matter. If it’s your first peak or fiftieth, something about climbing a mountain stiffens the spine, makes it feel OK to be a little headstrong for a change, even if the mountain ultimately ends up having its way with you. Could be the metallic clang of ice axe and crampons on your pack, the burly task ahead and the feat you’ll hopefully leave behind, or the very idea that you’re climbing a mountain and those folks who just sauntered by on their way into the lodge are not. I know I was feeling it that night — still do at times — and I know everyone in that cold and concrete space had a taste of it as well, even if we were all nervous about whether we’d brought enough water, remembered a map and compass., or were in the shape we should be.

Climbing Mount Hood was something I’d wanted to do practically since my eyes first took in its sharp white summit two years earlier. Even though I grew up in the flatlands of north central Ohio in a county whose highest point is a 1,300-foot drive-up hill called Mount Jeez — as in, Jeez, isn’t the view from up here amazing? (and it is, especially in autumn or during summertime meteor showers) — I felt naturally pulled toward the mountain and its top. I wasn’t a climber. I had only recently started backpacking and seriously hiking, and knew little about what it would take to climb a Cascade mountain, or even if you could.

And then, one dark and late spring night around a wild campfire at Oswald West State Park on the Oregon Coast, someone told me you could walk to the top of Mount Hood in sneakers.

That’s it, I thought right then. To the top of the mountain.

This entry was posted on May 23, 2011 by onmounthood. It was filed under Uncategorized .