Twice in the past two weeks now, we’ve had grand plans to spend the day skiing on Mount Hood, only to have those plans flooded out by unending rain. It’s been a pretty bad snow year so far, but still, we never counted on two outings to be so thoroughly saturated that we wouldn’t even be able to set foot or ski on the slopes. (Nor did we find any humor in the fact that the days immediately after each of our rainouts were sunny, bluebird days on the mountain.)

While those days may have taken an unexpected course, we still made what we could of them, which was hardly anything to complain about.

Sneaking in a day’s worth of runs at Summit before the evening rains set in.

Late-night around the fire at Timberline Lodge, eager for an early ski morning. 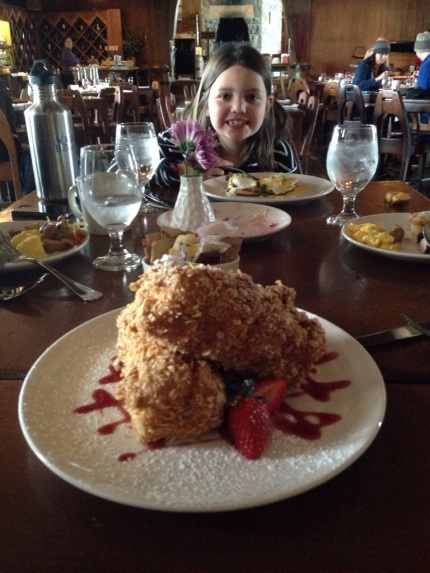 Thwarted by rain, we opted for the lodge’s storied Timber Toast instead.

Celebrating Spencer’s 4th birthday in Hood River after giving an On Mount Hood presentation to around 100 folks for Gorge Owned’s Sense of Place lecture series.

Sunrise from our room at the Hood River Hotel was promising.

But the rains returned in full force, leaving us to stroll the streets of Hood River and hope for another, snowier day to head back to the mountain.

The views from Hood River Mountain

There’s no doubt about the views from atop Hood River Mountain.

The hike up this little hill just outside of downtown Hood River covers just under 2-miles roundtrip and goes up 600 feet or so pretty steadily. So it’s not going to blow you away in terms of exertion or exhaustion.

The view from up top, however, is another story.

Yet sometimes, despite the grand views like this, there are other, more subtle sights that can have just as big of an impact.

We hiked up to the top with the kids a few weeks ago, and even though the day was gorgeous, the flowers in bloom, the mountain and all of the Hood River Valley in big, full view, it just wasn’t enough to keep the little girl happy.

But then she started looking around a little more and found something much more enchanting than a jaw-dropping mountain view. And all of a sudden, Hood River Mountain became a much better place. 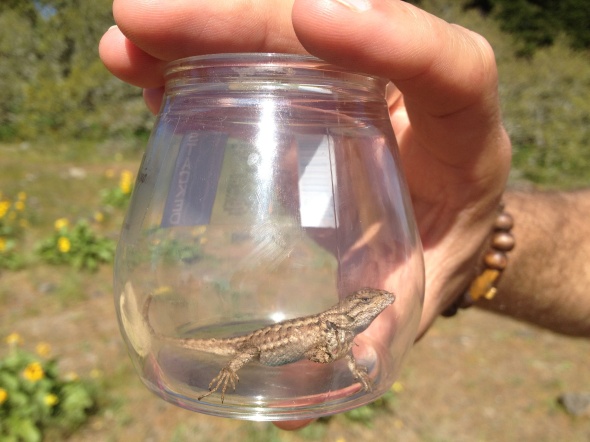 (Thinking this is a Western Fence Lizard; knowing that it is inside an empty Stack Wines glass — great for the trail!)

It’s always flattering and honoring to come across On Mount Hood in local bookshops. This one came from Graham’s Book & Stationery in Lake Oswego, where the book has found a home amidst a great selection of Oregon books.

One of the things I really like about this picture isn’t just On Mount Hood though, but some of the other books that are there as well.

One row up and to the right is Crossings: McCullough’s Coastal Bridges by Judy Fleagle and Richard Knox Smith. What I love about that is that 12 years ago, Judy Fleagle was the editor of a magazine called Oregon Outside, and I was a furniture truck driver and an aspiring writer looking for a break. Judy gave me that break by publishing one of my very first pieces ever, a story about canoeing some of Oregon’s alpine lakes. The layout and design and editing were so nicely done that I still use that clip whenever I’m pitching other outdoor stories.

Right above Judy’s book is Timberline Lodge: A Love Story, which was edited by Jon Tullis, spokesman at Timberline Lodge. Jon not only provided a blurb for the paperback of On Mount Hood, but he also helped launch the book two weeks ago at Powell’s.

And just to the left is Hood River Valley: Land of Plenty, and below that, Columbia River Gorge National Scenic Area, both by Janet Cook — now the editor of The Gorge Magazine — and photographer Peter Marbach. I’ve had the pleasure of meeting both of them at past book events and have long admired their work spotlighting some of the beauty of Oregon, the Gorge and, of course, Mount Hood.

The boy’s a big fan of trains, as so many little boys are. And while we haven’t yet made the trip on the Mount Hood Railroad — maybe next Christmas for the Polar Express — we did get our fill of big engines out near the mountain this past weekend while camping at Memaloose State Park.

Threaded in between I-84 and the railroad tracks along the south side of the Columbia River a few miles east of Hood River, Memaloose is actually a fairly scenic spot, assuming you get one of the campsites with a commanding river view. But even if you do get a money spot, there’s really no escaping the noise — the constant din of highway traffic to the south, the regular, repeated rumble and roar of trains just one blackberry thicket away. What’s more, there’s another set of train tracks just across the river in Washington, which adds even more railroad action throughout any stay at Memaloose. Some people might find it a little too noisy.

Others, not so much.

Today, resident Mount Adams expert and photographer Darryl Lloyd sent out an interesting map of a unique and unofficial wildflower trail out in the Columbia River Gorge in between Hood River and the Dalles. I’ve never done it, myself, but it sounds pretty nice — and it’s got at least one incredible view of Mount Hood along it’s 6.5-mile way. Thanks for sharing Darryl!

From Darryl:
The wonderful Memaloose Hills Loop “trail” was first scouted by naturalist Russ Jolley many years ago. It’s known as one of the best wildflower hikes in the Columbia Gorge. Paul Slichter listed 128 species on a late-April field trip in 2009 (http://science.halleyhosting.com/nature/bloomtime/egorge/09/12.htm).
The unmarked trail is unofficial and few people know the route beyond the western part. There seems to be no map of it online, so I’ve undertaken the task with this draft. Since I didn’t use a GPS device, the route sketched in red is approximate. The total distance is about 6.5 miles, and you’ll be on public land all the way.
Below the map are some photos that I’ve taken over the years. There’s still a large number of flower species in bloom, but balsamroot is waning over most of the area. (All images courtesy and copyright Darryl Lloyd.) 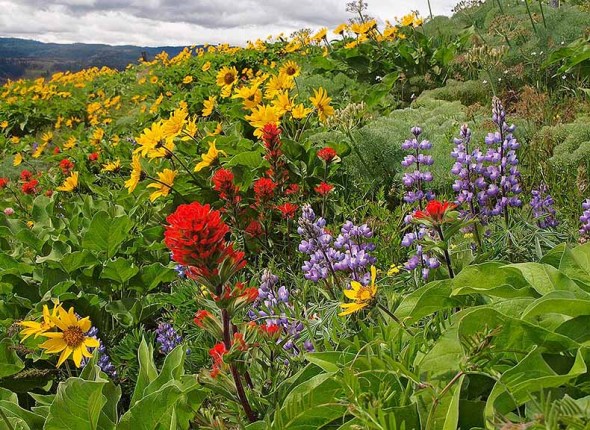